Last year sometime I came across the Schoolhouse Tunic pattern by Sew Liberated online and after looking at it for awhile I finally broke down and ordered it (it’s hard for me to pay $15 for a pattern unless I’m pretty sure I’m going to love it and use it multiple times).

I bought some beautiful dark grey linen fabric (which kind of reminded me of the fabric of the dress on the front of the pattern – yeah, I went super out of the box on that one…) and got to work. I made it as far as assembling the bodice and attaching the sleeves – but things didn’t line up quite right and so it sat around for awhile till I was ready to tackle fixing it. Awhile ended up being about a year.

Last night I picked it back up – ripped off the arms that I originally made and drafted some new ones – cap sleeve length since I was kind of running out of extra fabric. All was going well and my top was finally starting to look right.

But then after I got the skirt part attached, I realized how disproportionate the whole thing looked – so I tried it on. Turns out the thing about it being disproportionate was just because I had made it long though on the top to accommodate my large bust – which was a good thing. I just looks a bit funny on the hanger.

Of course, with trying it on I realized how the pleats in the skirt make me look a bit poofy and possibly pregnant. Which I’m not. I’ve read others notes about how they used gathers instead of pleats but somehow I don’t think that would help very much.

I’m trying now to decide what I should do with it.  I really don’t feel like taking apart the whole skirt to fix it though, so I might just let it go for now and make some adjustments for next time.

What I’m thinking for next time… cause I will make this again (even if it’s for someone else): 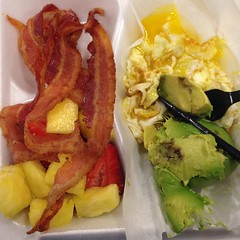